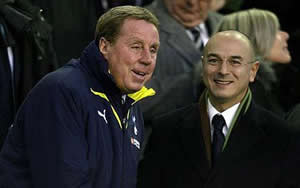 How Things Have Changed – Spurs vs. Wolves

Our season only commenced after our away victory at Molineux (0 – 2) in September last year. We had lost our first 2 games to the Manchester duo and managed our first away win against Wolves who at the time were unbeaten and 7 points in front of us. Right now we are breathing down both Manchester clubs necks threatening them with an upset they never expected. Again I repeat how things have drastically changed.

Since losing to us, Wolves have lost their form and find themselves exactly in an opposite position as we are now, i.e. battling in the relegation zone having only won 2 games against Wigan and Sunderland in their last 17 games. They are battling for survival and could be a dangerous proposition to tackle. I’m sure that Mr. McCarthy will do his best to stop our attack by adopting a defensive approach. If they get a point from today’s game they will be very happy, whilst 2 points dropped from Spurs side will be a disaster and a major setback towards Champions League football and the title.

The last time Spurs played against Wolves in January was way back in 1951 and Spurs went on to win the Championship that year. Now that is a good omen for those who are superstitious because in that year and in the opening game we heavily lost to Blackpool by 4 – 1.

Like us, Wolves also have their injuries. Their skipper Johnson was injured in last weeks F.A. Cup game at Birmingham. He is doubtful for today’s game together with ex-Spurs player, Jamie O’Hara, who has been out with a groin injury since December 2011. To add to their injuries, defender Zubar is also an absentee. Their midfielder, Milijas, is back from a 3 match ban after picking up a red card at Arsenal with whom they drew 1 – 1. Wolves danger man must be their forward Steven Fletcher who has scored a third of Wolves total 22 goals. Wolves will be physical today and will try to destroy our free flowing game, that’s for sure.

Although we managed well against Everton, I still feel that our midfield needs the likes of Parker or Sandro. Parker might be fit enough and could take part in today’s game. On the other hand, Livermore did a fantastic job on Wednesday, but the question remains if he can perform like he did on a regular basis.

Although Adebayor has not scored for some time, I feel that today he will be prolific in is role. Fingers crossed for another 3 points in the bag.