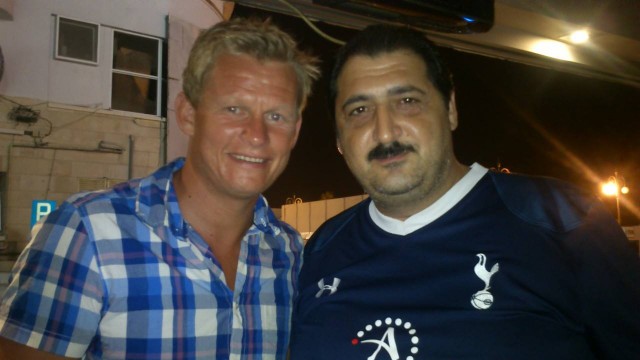 In an attempt to find out about Spurs supporters from a all walks of life, we sent 20 Questions and we look at their replies.

Terry is the Chairman of the Cyprus Spurs Supporters Club, and the replies to the questions are listed below.

1. What is your name?        Eleftherios Charalambous, commonly known as Terry

7. What is the most exciting moment you always cherish, from your Spurs memory?            Winning the FA Cup against Man City in the replay with Villa’s wonder goal

8. Where is the weirdest place (unusual location) you watched Spurs?          Come to think of it, it’s not that unusual…. at Papadopoulos stadium against Anorthosis and AEL as well against APOEL at the GSP stadium in Nicosia.

9. Which footballer, past or present, is your all-time favourite?          Hoddle for sure

10. What is your all-time favourite goal? When and against which team was it scored?       Hoddle’s on the volley against Man United

11. Who is, in your opinion, the all-time best manager at Spurs?          In my life-time Keith Burkinshaw and Poch is not far behind.

20. What item in your possession related to Tottenham Hotspur, do you consider your personally most valuable? (not monetary value)             scarf bought back in 1980’s