The club lets all its members know which pubs are showing Spurs games either via email and also on the website. We do not have a ‘home’ location in Cyprus as it is only a small island but we do however have dedicated Tottenham Hotspur pubs in the districts of Larnaca, Nicosia, Limassol,  and Paphos. The club also organises various events during the season at the official pubs, with supporters travelling to attend these events. Most dedicated host pubs offer a discount on all non-discounted food and drink to all members upon production of a valid membership card.

If you’re a Tottenham Hotspur fan and live in Cyprus or visit the island frequently, join the Cyprus Spurs Supporters Club today!

You can also find us on the Official Tottenham Hotspur website in the Fanzone section.

My first visit to WHL was with my Dad, I was 10 years old, it was Weds 29th August 1962 in the East Stand upper against Aston Villa, Spurs won 4-2 and with a crowd of 55,650. I was hooked & from the age of 14 became a regular at White Hart Lane making the trek from Hampton by bus, train & long walk up the Severn Sisters Rd.

In the late 70’s and I had a season ticket, then in the 80’s my then employer had a box at WHL which I managed for 10 years, I met many of the Spurs players, Management & backroom staff and enjoyed many corporate events. I was so lucky.

Many hundreds of home and away games later I settled in Cyprus with Susan and was delighted to be involved locally and nationally with the CSSC. I now watch from afar the development and growth of our wonderful club and new stadium, I hope for continued improvements on and off the field. A trophy or two would be nice… 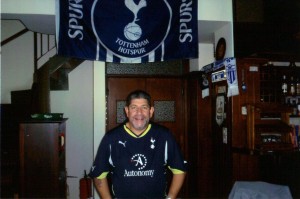 I am 62 years old British London born Cypriot with dual nationality. . I am married to Maro, and between us we have 4 grown up children and 5 Grandchildren.

I am a retired London Metropolitan Police Officer. Having completing my 30 years of service in the Police Force I moved to Cyprus in 2010 and live in Paphos, soon after moving I became involved with the Spurs Supporters Club in Paphos and before becoming Club Secretary I enjoyed 4 happy years as the local Club Manager.

I have been a Spurs supporter since I was at primary school and that seems a very very long time ago. I went to my first Spurs game on 9th September 1967, we were playing Sheffield Wednesday and we won 2-1. I remember standing in the enclosure in the West Stand, right at the front holding the rails, the friend I went with told me that it was normal to run onto the pitch at the end of the game and touch as many players as possible, which I did, a great but naughty experience; just as well I wasn’t arrested ! 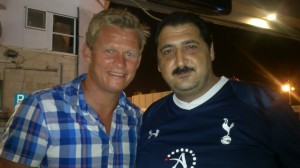 To know more about Terry, please read his 20 Questions & Answers on our blog.